Students of English literature might be acquainted with Alan Sillitoe’s classic novel, “The Loneliness of the Long Distance Runner.”  In that story, the protagonist, Smith, gains relief from his chaotic schedule in a well-heeled boarding school and time to muse about life in his daily runs.  As a runner myself — having competed in track and field, cross-country and marathons — I empathize with Smith.

One of the simple pleasures of long-distance running is the seclusion that Sillitoe notes.  The solitude of running provides an opportunity to appreciate, inter alia, the beauty of the sun setting over rolling hills while hearing the sound of leaves crunching under one’s feet.  However, sometimes the solitude is simply lonesome.

This is why I sometimes think that Sillitoe was in fact writing about the doctoral adventure.  The Ph.D. is a very lonely pursuit, and it goes without saying that it is a long race, metaphorically speaking.  (The median time from matriculation to receiving a Ph.D. is 6.0 years.)  And the isolation of the Princeton graduate experience has given me an epiphany about life: It really is stranger than fiction.

Though I don’t run on the beach, I often imagine leaving tracks in the sand during my excursions.  This vision is brought to mind by a Christian fable popularised on bookmarks called “Footprints.”  In this tale, the narrator speaks of viewing his life with Jesus after passing to heaven.  Tracing his path in the sands of a beach that symbolized his journey through life, the man notices his footprints punctuated with those of people who shared the trek with him, including friends, family and Jesus.  During the saddest times in his life, the man notices only one set of footprints.  With this he is distraught, asking Jesus why in his most downtrodden times he was left to walk alone.  Jesus replied that during the saddest times of the man’s life it was not the man’s footprints in the sand; rather, Jesus carried the man during these times. 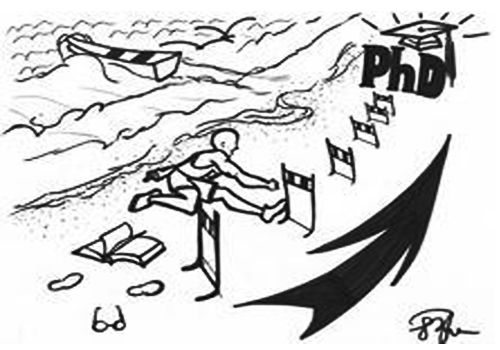 Alas, the Princeton graduate student’s long march is often truly done without company (and also comes with people to kick proverbial sand in the student’s face while he or she is down.)  Even the finale of the Ph.D. is done with detachment.  When the dissertation is handed in, there is no fanfare.  For some, the rite of passage after a successful defense is to get drunk at the Annex, alone.  But we are grateful to those who provided us with companionship in our sojourn and offered water in times of thirst.

As for me, it is hard to believe that after so many years, after countless lonely nights in Firestone Library and Fisher Hall, after so much heartache, it’s coming to an end (phew!).  And as I have learned, in the race that is the Ph.D., it’s not about winning the blue ribbon, but rather finishing.

Somewhere along the way, a poor kid from Toronto was able to overcome hurdles that should have made me a statistic.  Somehow, a kid who used to run from home to work and back (approximately 11km) to save on the cost of a bus ticket — but that’s OK, I was training for the Toronto marathon anyway — is about to become a Princeton Ph.D.

The story needs to be repeated. But we still have a long way to go.

Aside:  A sobering reminder of the hurdles that we have to overcome is exemplified in a recent article published in Social Science Quarterly by Princeton academics Espanshade and Chung.  They show that affirmative action, legacy admissions and athletic recruiting give targeted groups an equivalent boost of between 160 to 230 points in their SAT scores (out of 1600).  Now, there is nothing wrong with schools choosing to help certain groups that they feel will add dimension to college life, especially when they do so to combat social ills.  However, a system is morally bankrupt when it penalizes an already marginalized group:  Espanshade and Chung show that admissions policies handicap Asian-American students by the equivalent of 50 SAT points.

Anyhow, in perspective, perhaps the low-key way of celebrating the conclusion of the Ph.D. is for the best.  After all, looking back, I realize that the race has just begun!

Kai Chan is an economics graduate student from Toronto, Canada.

(My preferred title is “Loneliness of the PhD student.”)