The World Economic Forum (WEF) defines competitiveness as “the set of institutions, policies, and factors that determine the level of productivity of a country.”  The Institute for International Management Development (IMD) defines competitiveness as “the ability of a nation to create and maintain an environment that sustains more value creation for its enterprises and more prosperity for its people.” Earlier discussions of competitiveness often dwelled (too much) on the ability of nations to compete internationally against other nation states. Paul Krugman (1994) remarked on the “dangerous obsession” of policy makers to think of nations as business enterprises competing in a global market. Thus competitiveness is now generally viewed as not just about productivity in the tradeable sectors, but more generally domestic productivity as a whole.

I spoke at the Kazakhstan Growth Forum 2016 (Almaty) on the UAE’s competitiveness strategy, namely on how that country uses global performance reports to guide policy. 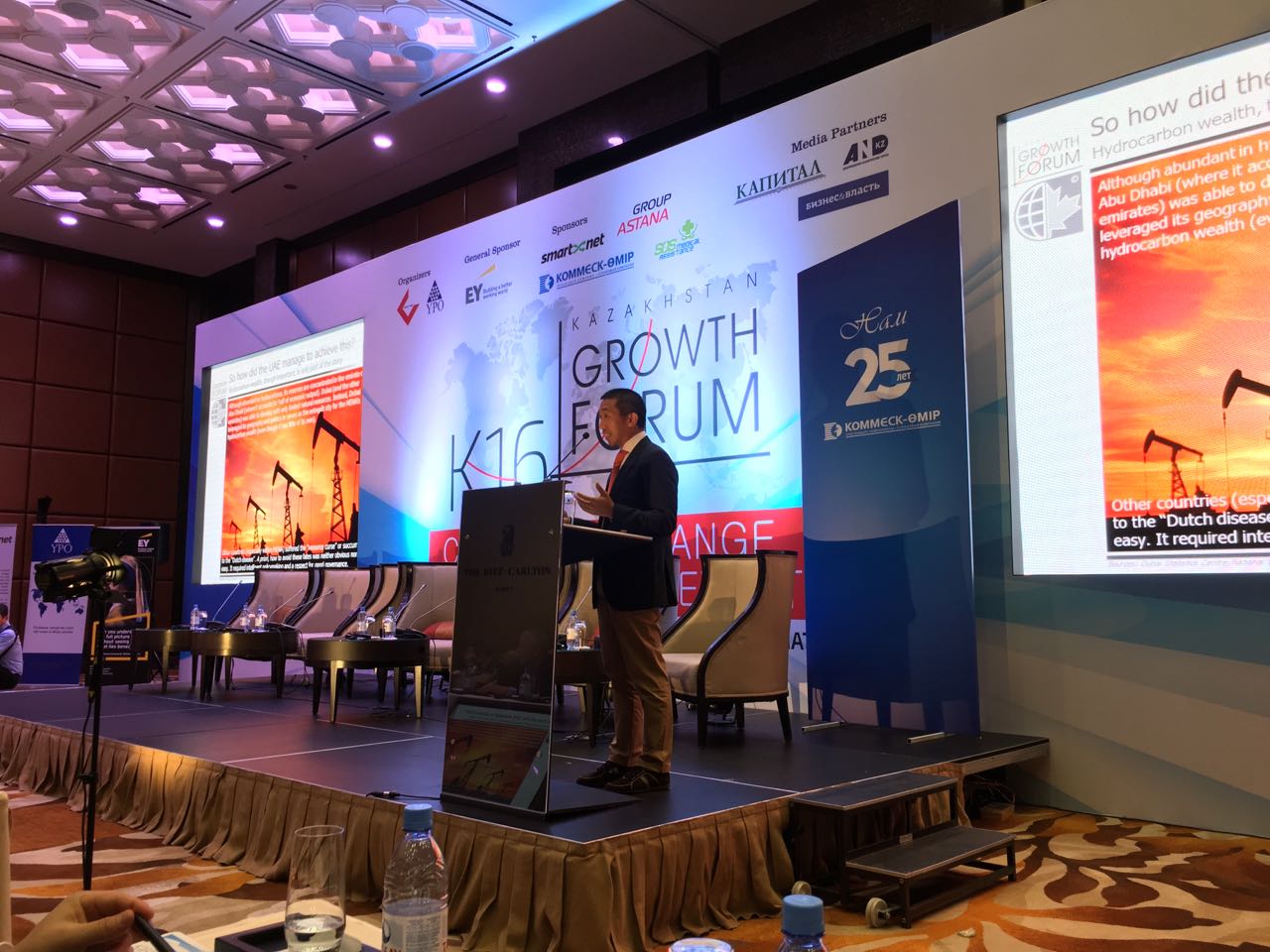 Click here to learn about how the UAE uses international benchmarks as a means to steer policy. Policy by benchmarking is in some ways akin to the policy of inflation targeting by central banks, i.e. it anchors expectations of what policy makers hope to achieve with transparent targets. And it is believed (or hoped) that targeting benchmarks will help fulfill the development objectives of growth and competitiveness, just as a central bank targeting inflation is able to generate macroeconomic stability.

Dubai has quickly transformed itself into a highly competitive global city — it is classified in the alpha-plus category according the Globalisation and World Cities Research Network (GaWC). I spoke at the World Strategy Summit 2015 (Abu Dhabi) on how Dubai used its competitiveness strategy to transform from a desert outpost into one of the world’s most influential cities. 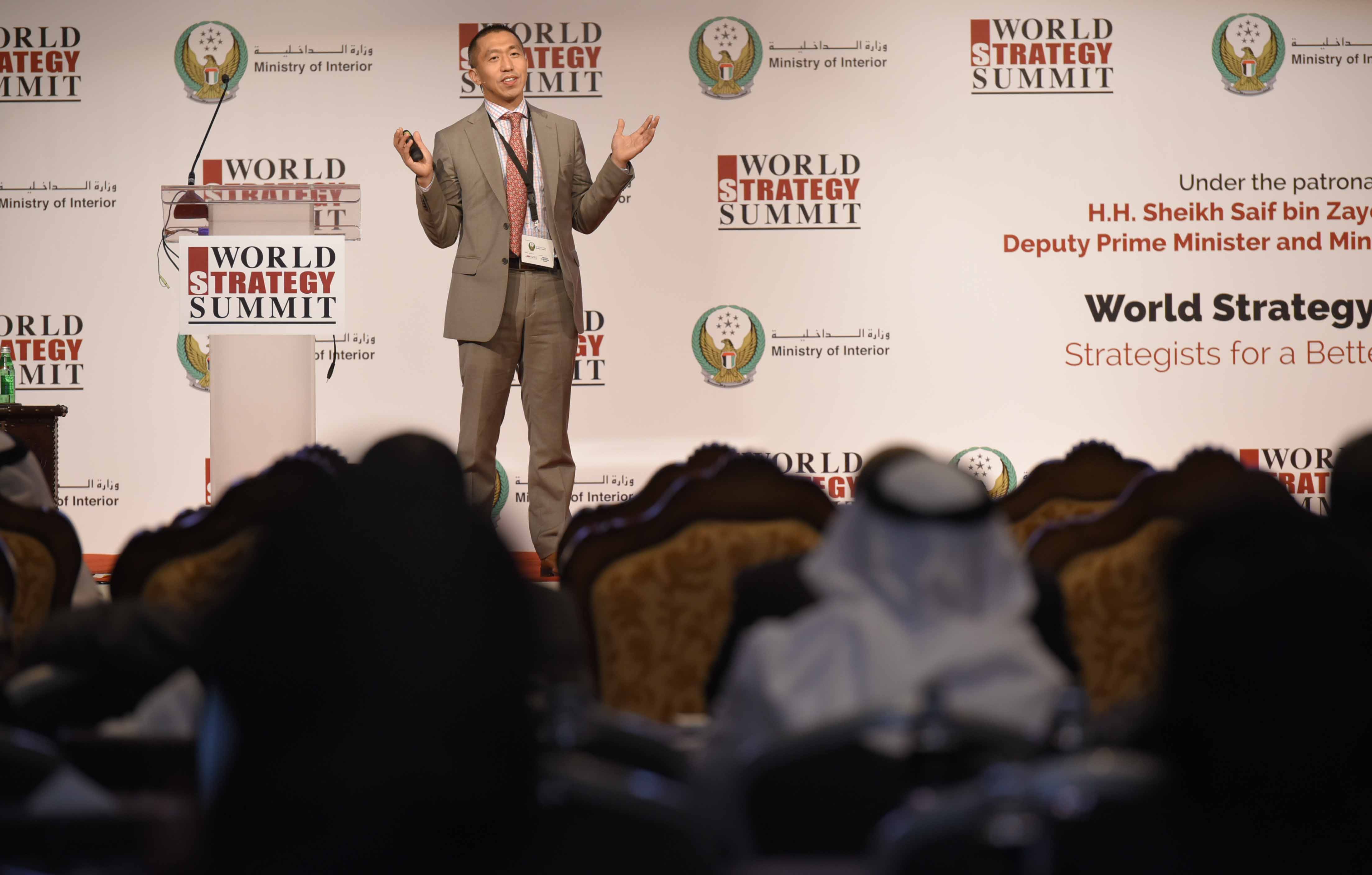 Click here to learn about how Dubai used its competitiveness and development strategy to grow into a global city.

The major indices of competitiveness are the WEF Global Competitiveness Index and the IMD World Competitiveness Index. Both are released annually and compare a cross section of countries by applying a methodology on a set of indicators to arrive at a single number which purports to measure a country’s competitiveness. The IMD was the first to initiate this agenda. The WEF’s index came as an offshoot when it split from the IMD in the 1990s. The WEF index uses a higher proportion of survey indicators, whereas the IMD index relies more on statistical data.

Other notable indices — though they do not explicitly measure competitiveness, but nonetheless remain relevant in that area — are the UN Human Development Index and the WB Doing Business ranking. In fact, the proper terminology for these types of reports (based on an index to make cross-country comparisons) are “global performance reports”. The Global Innovation Index by INSEAD has become topical of late, as are indices that track gender development, the environment and key sectors of the economy. The Economist (2014) has an interesting take on the proliferation of these reports (“Rankings the rankings“). Although the surge of global indices has seen its share of flawed reports, they can be used effectively to steer policy and engender positive change. However, caution should be taken in understanding and interpreting their outputs — especially as many are not crafted with the aim of being tools to help with policy decisions!

The below are charts that show how some notable global performance indices correlate with GDP per capita (PPP) stratified along geography/culture. The stratification along geography/culture is very informative. Although the trend line is log-linear, the placement of some groups are not distributed evenly about that line. 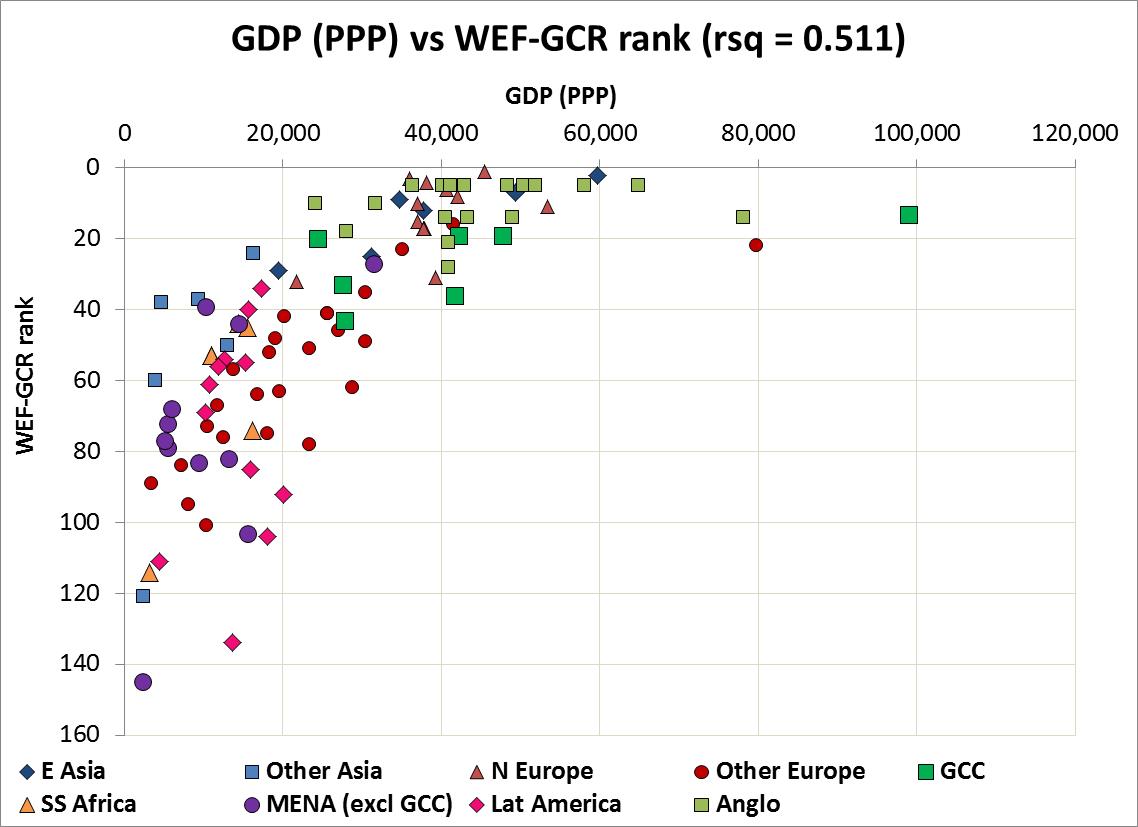 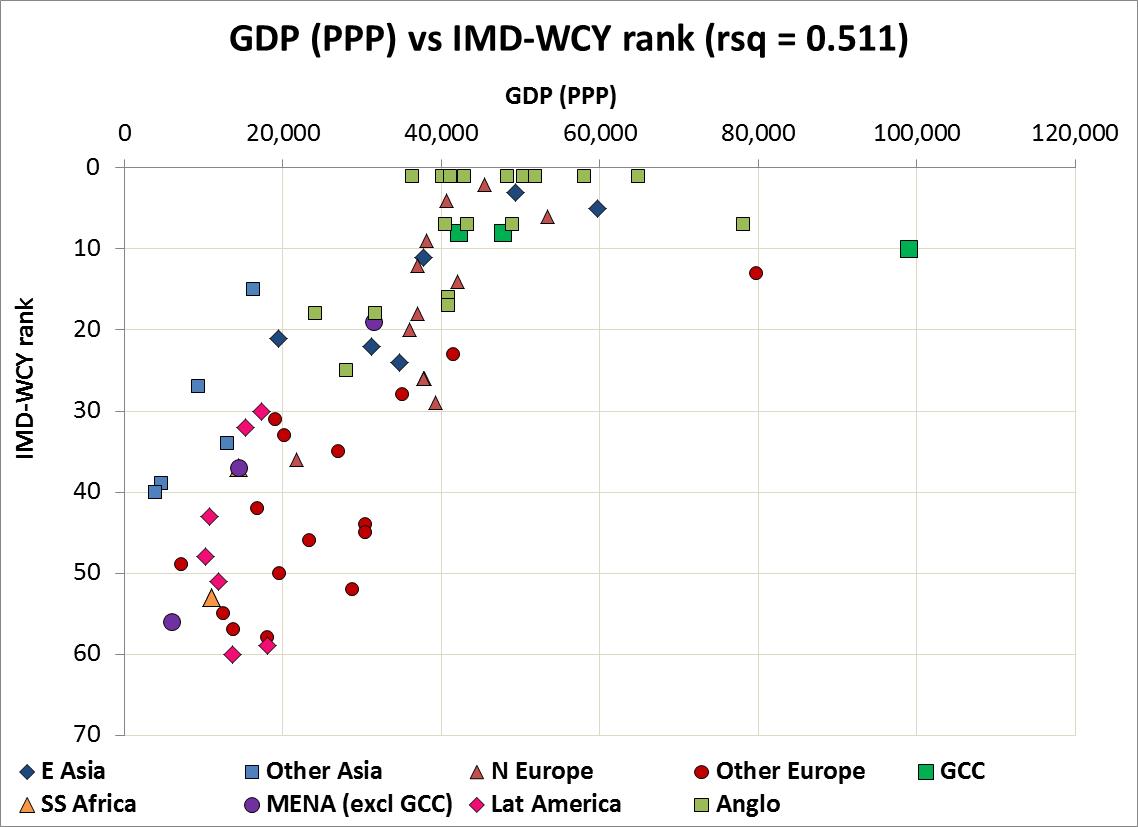 Competitiveness and the economy

Competitiveness and growth intuitively should be highly correlated. However, the data are weak, at best, in showing and direct and significant relationship between competitiveness and economic growth. Part of this is because the most competitive economies are at the frontier of the production-possibility curve, whereas less competitive nations have an easier time to grow their output as they are not in any way limited by technology.

Another misconception is that competitiveness is a competition amongst nations with winners and losers. This goes back to the error in thought pointed out by Krugman (1994). Rather than thinking of competitiveness as a zero-sum game, like trade and specialisation, it can prove to be a race to the top whereby all nations gain as the competitiveness of “rivals” expands the frontier of knowledge and technology for all.

Of late has been a movement towards more holistic measures of success rather than focusing purely on economic indicators. For example, the World Happiness Report by the Earth Institute is a global performance report based on Gallup’s survey question on well-being (Cantril Ladder). Likewise, the UNDP Human Development Report has many variants of the Human Development Index and other indices within the report that attempt at a more holistic view of development. The Legatum Institute has its Prosperity Index and

Competitiveness and the green economy

The below is a report on the UAE’s green economy initiatives and how they fit into that country’s strategic development goals. The piece was written for and presented at the Global Federation of Competitiveness Council’s 2014 Annual Meeting held in Banff, Canada.

“The UAE’s best practices in government-related activities in the green economy” (Chan, 2014)

Although language seems an obvious driver of competitiveness its role is mostly ignored in most academic/technical discussions. Nevertheless, most people recognise that the prominence of London as a global city owes much in part to the English language. Likewise, New York is the “capital of the world” in large part because English is the de facto lingua franca of the world. Indeed, Hong Kong and Singapore — with their English infrastructure — rather than monolingual Tokyo are Asia’s financial centres. Indeed, of the top-10 global financial centres, 8 are English-speaking or English proficient cities.

However, it is not Switzerland that takes the crown for having the most competitive language profile, but rather Singapore. Its country PLI is 0.926. Canada comes second with a country PLI score of 0.925.

Below is a chart that shows the correlation between the WEF’s Global Competitiveness Index and the country PLI score. 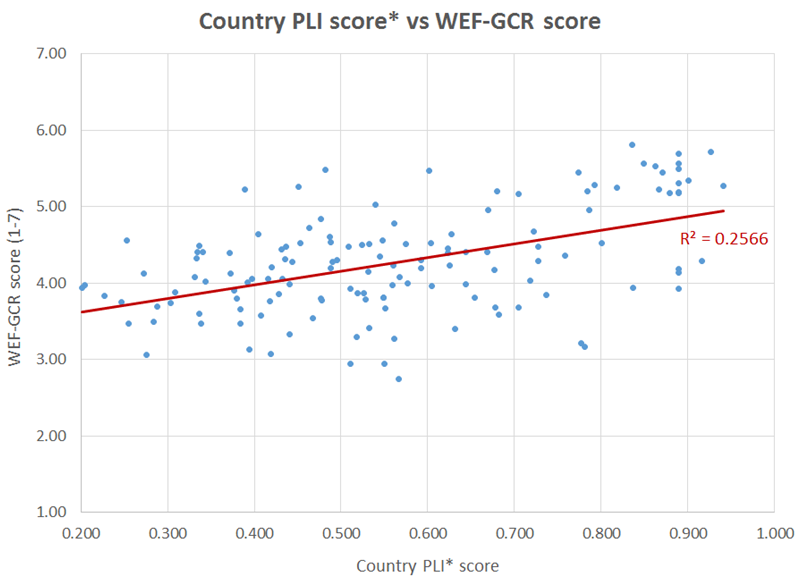